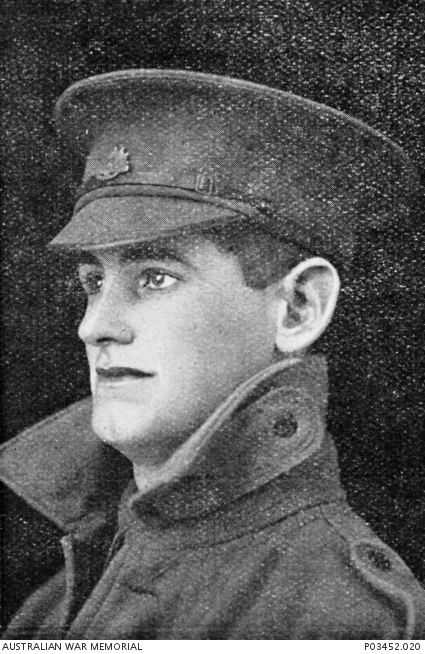 Some historians of the Great War have devoted space to considerations of the tragic loss of talented men that occurred on every side in that war. The experience of trench warfare altered in some ways anyone who experienced it; one of the legacies of that traumatic time was the sense of utter waste of so many young, talented people. One gifted young man lost to the Toowoomba community was Charles Robertson Wonderley. Charles enlisted in Brisbane, on 11 March 1916, where he had recently completed a degree at the University of Queensland.  In those days only a small proportion of the population received a tertiary education; those who did were expected to fill the professions and become leaders of the community. Charles had graduated with First Class Honours in Classics, an excellent grounding at that time for the law and later, perhaps, politics. His name is also on the University Roll of Honour, Forgan Smith Building, St Lucia. Copyright permission has been received for an article written for Contact magazine, The University of Queensland.   Contact Magazine The University of Queensland – Summer 2018

Charles was born and grew up in Toowoomba. He was the son of Robert G. (deceased) and Isabella Wonderley (nee Robertson) of “Caloola” Taylor Street, Toowoomba. He was from a prominent family of solicitors in the city. He attended the Toowoomba Grammar School, where he was a member of the senior cadets. Later, living in Brisbane, he belonged to the 7th Infantry, civilian forces.  Charles was 5’10” tall and weighed 145 pounds. He had a dark complexion, light blue eyes, black hair and was a Presbyterian. He volunteered aged 21 years and 5 months.

Charles was posted to the 9th Battalion and sailed with the 24th Reinforcements from Sydney on 24 January 1917. He was made a sergeant for the voyage but reverted to private when he reached England and continued training. He landed at Devonport and went into camp at Durrington. His progress to the front was interrupted by courses at the 12th Brigade School of Instruction, and when he finished these he was transferred to the 47th Battalion and appointed a lance-corporal.

In August 1917 Charles finally reached his front-line unit.  Immediately afterwards the AIF was thrown into the Battle of Passchendaele. Charles was “wounded in action, GSW Lt leg, Lt hand” on 12 October; he was also awarded the Military Medal. For his injuries he was evacuated to England where he recovered in the 2nd Birmingham War Hospital, Northfield, and the auxiliary hospital at Dartford. For the MM his mother received a message from the King a year later, stating: His Majesty the King has been graciously pleased to approve the award of the Military Medal for bravery in the field to No. 7337 Private Charles Robertson Wonderley.

In November 1917 Charles was recovered sufficiently to have a furlough in England. From mid-December until February 1918 he made his way through the base depots in England before rejoining the 47th on 9 February 1918.  In March he attended the Australian Corps Gas School before going back to the battalion as it held the line the day before the German attack at Dernancourt.

At Dernancourt, the 4th Australian Division was given the task of halting the German offensive that threatened the city of Amiens in the Somme Valley. On 5 April the 12th Brigade, including the 47th, though heavily outnumbered, successfully resisted a strong German advance. On this day Charles Wonderley, aged 23, was killed in action. He was buried on the battlefield, one of 269 men lost by the 47th that day, the heaviest loss by any of the eight Australian battalions involved.

In his book Battle Scarred, Craig Deayton describes the remarkable record of the 47th Australian Infantry Battalion in the First World War.

He details the calamitous experiences under heavy shell fire at Pozières, the costly and futile attacks at Mouquet Farm and the frigid winters on the Somme. He explains the battalion’s misfortune to be called into some of the AIF’s most costly campaigns and how chance found the 47th in the worst places within those battles.

At the Battle of Dernancourt where Charles Wonderley lost his life on 5 April 1918, the 47th Battalion fought in the 4th Division’s struggle to save Amiens from the great German offensive of 1918. Beside the railway line at Dernancourt the 47th Battalion found itself squarely in the path of the heaviest attack ever faced by Australians in this or any war. The battle resulted in one of the most important victories of the war for the Australians. But the 47th suffered heavy losses, so heavy that the battalion was broken up. The few survivors joined other battalions.

Deayton devoted 22 pages in his book to outlining the proceedings of the inquiry that followed the Battle of Dernancourt. His concluding remarks pay tribute to the contribution and sacrifice of the men of the 47th:

“There was probably no more important battle fought by the men of the 47th. They had not only taken the full weight of the attack on 5 April, but had fought a titanic struggle over eight days and, with the other units of the 4th Division, decisively halted the German drive on Amiens. But it was their Calvary. To the enduring misfortune of the 47th, its part in the victory at Dernancourt, won at such enormous cost, slipped into the background of Australia’s history.”

Mrs Isa Wonderley wrote to the army and in 1922 visited Europe for a battlefield tour. Sadly, Charles’ personal effects were lost at sea when a U-boat sank the transport ship bringing thousands of packages of fallen soldiers to Australia. In 1918 Isa Wonderley was presented with Charles’ MM; indicative of the time, she asked that “this decoration be handed to her by someone who has seen active service”. There were many ways of reaching out to lost loved ones. Charles was buried post-war in the Dernancourt Communal Cemetery Extension. He was one of a number of Australians found on the battlefield not identified individually; he is commemorated on Special Memorial 28.

In her circular to the historian in about 1928 Isa Wonderley mentioned that one of her own brothers was killed at Gallipoli in May 1915 while serving with the 2nd L.H. Regiment (see Robertson G.H.).  Another brother was Brigadier-General James Campbell Robertson who commanded the 6th Brigade (Victorians) in 1918; he is buried at the Drayton and Toowoomba Cemetery. Isa was also prominent among the mothers in Toowoomba who organised the funding and construction of the Mothers’ Memorial.  In the Old Hall at Toowoomba Grammar School, the C. R. Wonderley Roll of Honour donated by his mother, bears his name along with 44 other old boys who paid the supreme sacrifice. Charles Robertson Wonderley MM is printed in gold lettering on the University of Queensland Roll of Honour, 1914-1919, and on tablets at Emmanuel College and Saint Andrew’s Uniting Church. Dispositions of Battalions before the Second Battle of Dernincourt – CR Bean, p 365