Sergeant Keith Edward Buettel, the son of William Buettel and Elsie Maud Buettel was born at Maryborough in Queensland on 12th August 1919.  He was educated at the Maryborough Boys’ Grammar School during the years 1932 until 1934 before attending the Toowoomba Grammar School where he completed the University of Queensland Junior Public Certificate in 1935.  He had served for 2 years in the Maryborough School Cadet Corps and for 1 year in the Toowoomba Grammar School Cadet Corps.  He applied for aircrew training in the Royal Australian Air Force on 21st May 1940.  He was enrolled in the Reserve of the R.A.A.F. on 2nd July 1940 after swearing an oath of allegiance on 2nd July 1940.  At the age of 21 years and 4 months he was enlisted in the Citizen Air Force of the R.Á.A.F. at No. 3 Recruiting Centre in Brisbane on 6th December 1940 and allotted the service number of 404872.  He gave his next of kin as his father, Mr W. Buettel, Station House, Hughenden, Queensland.  He also nominated Mrs S. Megan, residing at 96 Nudgee Road, Ascot, Brisbane, as a person to be notified in the event of injury or death.  He had been a Cadet Draftsman at the Toowoomba Foundry Co. Ltd before being employed as a Clerk with the Security Branch of the Public Curator’s Office in Brisbane.  His physical description at the time of his enlistment was that he was 5 feet 9 inches in height and weighed 131 pounds.  He had a fair complexion, light brown eyes and brown hair.  He stated that he was of the Methodist religion. 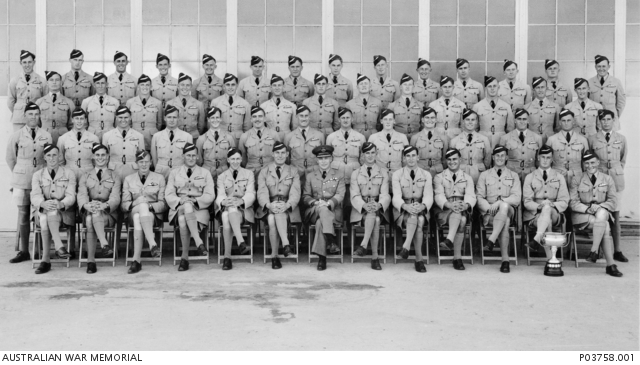 Sergeant Keith Buettel having trained on De Havilland Tiger Moth and Harvard Mark 2 aircraft, graduated from the Flying Training Course at No. 11 Service Flying Training School at Yorkton, Saskatchewan, Canada, on 23rd July 1941.  After completing his flying training he was awarded the Flying Badge and he then joined No. 1 Embarkation Depot at Halifax, Canada, on 31st July 1941 for onward movement to England.  He embarked from Canada on 31st July 1941 and joined No. 3 Personnel Reception Depot at Bournemouth in England on 31st August 1941.  He then joined No 58 Operational Training Unit at Greymouth, Isley, on 15th September 1941 where he trained as a day fighter pilot flying Spitfire aircraft.   After completing his training at the Operational Training Unit, he joined No. 118 Squadron, Royal Air Force at Filton in England on 28th October 1941.  No 118 Squadron flew patrols over convoys close to the British coast and it later began to fly fighter sweeps and bomber escort missions over northern France.

Sergeant Keith Buettel was the pilot of a No. 118 Squadron Royal Air Force Spitfire fighter that accidentally collided in the air with another Spitfire at Farley, near Salisbury, in Wiltshire, England at 1345 hours on 11th February 1942.  At the time of his death Keith Buettel was 22 years of age.  His remains were interred in the Ringwood Cemetery, Hampshire, England, at 1100 hours on Tuesday 17th February 1942.  His name is commemorated on Panel No. 119 at the Australian War Memorial in Canberra and locally on the Toowoomba Grammar School World War 2 Honour Board. Australian War Memorial photograph UK0090
“Running up” the engine of a Spitfire aircraft before handing it over to the pilot.